Chapter three of the third Inscrutable Machine book.  This is all you're getting until it's finished and published, so make this last!  I'm hoping that rather than satisfying you, it will make you crave the rest of the story.  I chose these three chapters because they're sort of the book's 'part one', setting up what the book will be about - as much as that ever works with my books.

Enjoy.  You do enjoy reading these, right?  I'm enjoying writing them.  I'll admit it - this whole chapter was a hoot to write.
Posted by Frankensteinbeck at 10:43 PM 271 comments:

I've been collecting photos for awhile, mostly from my wildly failed trip to UtopYA, and never got around to posting them.  So here they are, and any other photos I had in that collection!

Here's the Curiosity Quills table in the dealer's room at UtopYA.  I spent most of Thursday and Friday there.  What do you not see in this picture?  CUSTOMERS.  The con was practically deserted. 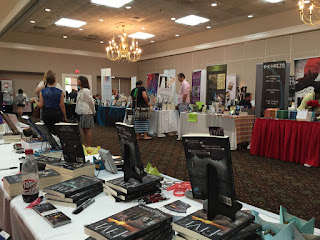 This was directly across from me.  Every time I looked up, it was SIX PACK ABS.  That was entertainingly ironic, because these photos don't convey just how incredibly few men there were at the convention.  It took divine grace to position the one straight male author right across from the one steamy women's romance novelist. 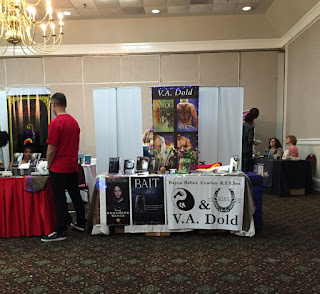 The convention was a total loss from a business perspective, but I met a lot of other CQ authors, and they were the most wonderful women.  They had a room party Thursday night, and while I did not get a photo of them shouting profanities at the top of their lungs while laughing, I do have these:  The SO of one of the authors attempting a thing he heard about where you can open a wine bottle by putting it in a shoe and thumping it against the wall.  It did not work, so he went and got the downstairs bar to open the bottle, which none of us had thought of.  I think that means he wins! 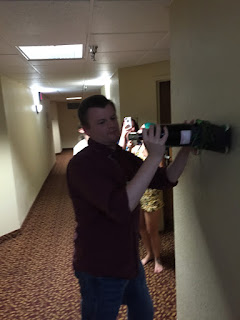 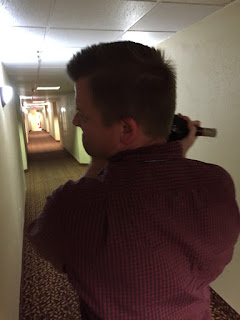 So, there was no business Thursday, and a few people Friday who told us what everyone says at cons - that they would be back to buy on Saturday.  That's how it always works at conventions.  Well... UtopYA, in its infinite wisdom, closed the dealer's room on Saturday.  That left us CQ authors up a creek, and I went sightseeing with Vicki Leigh and Gail Strickland (the two most awesome women in the universe, by the way*) in Nashville.  This is them, posing beneath a gigantic gold-leaf statue of Athena. 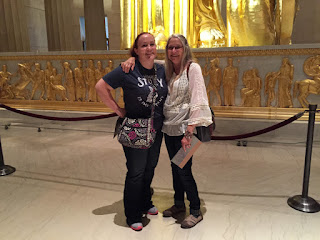 Not kidding about the statue.  Nashville has a life size replica of the Parthenon, including a reproduction of the lost statue of Athena.  The gold leaf is real.  The ivory is not. 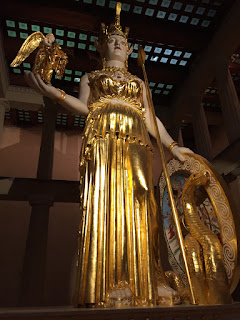 Photo with humans in it, so you can see that it really is quite a large statue. 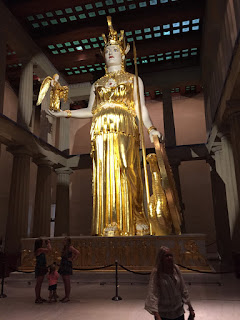 Interior detail on the shield. 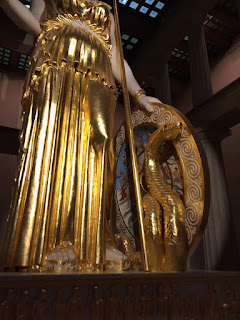 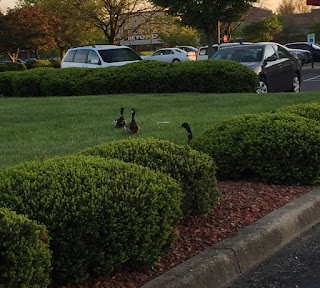 But vastly better than all of that, I offer you this:  A birthday present drawn for me by one of my friends.  I'm trying to figure out if I can size it to be a banner here, or something.  Hopefully, at least some of you have read enough of my books to know what you're seeing!

*Okay, maybe not, but only because I know some truly spectacularly awesome women.  Vicki and Gail were pretty badass, trust me.


Posted by Frankensteinbeck at 10:31 PM No comments: