Hail ereaders!  Hail Project Gutenberg!  Together they have given me the chance to do something I always wanted to do - read EE Doc Smith's Lensman series in order.

For those unfamiliar, the Lensman series (Triplanetary, First Lensman, Galactic Patrol, Second Stage Lensman, Children of the Lens) were written by EE Doc Smith in the 1930s, mostly a chapter at a time as serials printed in magazines.  They are one of the foundation stones of modern science fiction, and physical copies are hard to track down.  I was tickled pink to find out that they're now public domain and Project Gutenberg has scanned them into ebooks and they can be obtained for free online.  Note that they were very obviously computer-scanned out of physical books.  The typos are terrible, the kind of thing you get when a computer is trying to make sense of printed letters.  'Ploor' is written as 'Floor' about two thirds of the time.

Now, for the review.  The Lensman books are space operas, cowboy books in space.  The good forces of Civilization, led by the incorruptible near-supermen Lensmen, are trying to prevent us all from being conquered by the dictatorial and tyrannical forces of Boskone.  There are very few moral shades of grey, even though the author admits to their existence.  Everything is bigger than life.  The men are super manly, the women are super beautiful, the aliens are weird, the bad guys are abhorrently evil, the space ships and space ship battles are dramatic, there are gunfights and gloating villains and seedy dive bars and benign alien benefactors.  Suspension of disbelief is definitely not a priority, and the words 'starkly' and 'irresistible' get thrown around frequently, especially together.  It has hardcore pseudoscientific gobbledygook, like 'q-type helices of pure force' and 'duodecaplylatomate' and 'allotropic iron'.  It has an arms race that even Dragonball Z would be proud of, where by the end of the series planets traveling faster than light are being thrown around as siege weapons.

Is it any good at these things?  Yes, it's great at them.  The books are fun and suspenseful.  The silly tech feels very consistent, especially the whole inertialess drive concept.  The worst thing I can say about the books is that the purple prose describing how powerful space weapons are starts at excessive and moves quickly to ridiculous, and stays there.

The characters aren't deep, but they're likable in a 'gee golly whiz' way, and some of them are fascinating.  The series contains one of my favorite characters of all time, in fact:  Nadreck of Palain VII.  In these mostly morally simplistic books you have occasional flashes of fascinating insight.  Palainians are beings who live on planets like Pluto.  Their biology resembles ours so little they don't entirely exist in three-dimensional space.  As a race they are inherently lazy cowards.  They find risk unacceptable, and do everything the easiest way possible.

Nadreck is as heroic a Palainian as Kimball Kinnison, the main character, is a heroic human.  Nadreck is capable of taking risks, but only if they are absolutely necessary.  In his laziness, he identifies the most efficient way of doing anything.  He is utterly brilliant, inhumanly patient, and ruthless.  'Compassion' is something he doesn't understand.  He is dedicated to the general social good, but pity for his opponents, or even bystanders?  Forget it.  Nadreck is, absolutely, the most terrifying badass in the series.  He causes an entire fortified planet of evil archcriminals to commit suicide by subtly playing on their paranoia until their inherent evil sends them all berzerk and they kill each other.  The books explicitly state at one point that Nadreck would be the hero of civilization, except that the focus on efficiency that makes him so dangerous cripples him.  He's not capable of thinking beyond the current assignment.  Involving outside factors, planning for a general campaign against Boskone, these things would make his tasks too risky.  He just can't think that way.  It's a psychological point of surprising depth, and I love the character because of it.

One final note:  These books were written in the 1930s, and they provide an interesting glimpse into the prejudices of the times.  Some people may very understandably find them offensive, particularly misogynistic.  The heroes are white anglo-saxon males.  Other human ethnicities don't seem to exist.  Interestingly, they're not Christian.  The only religions that come up are given lip service to so people can swear when they're angry.  The attitude towards women fascinates me, because the books repeatedly stress the importance of equality of the sexes, yet they over and over flat-out state that the sexes are different in very 'Men Are From Mars, Women Are From Venus' ways.  Women are incapable of the ruthlessness of being soldiers, are emotional and filled with a 'vitality' that seems suspiciously maternal.

In summary:  The Lensman series is old-fashioned high adventure epic space opera.  Do not expect serious modern science fiction.  Do expect to have fun.
Posted by Frankensteinbeck at 10:10 AM 3 comments:

To An Author, This Is A Big Moment

My author's copies of my first three books arrived today.  Touching them makes me feel funny in my emotion places. 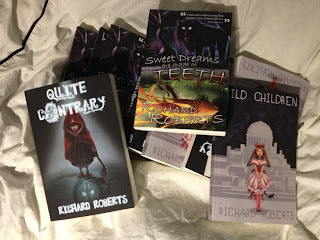 Right now they can be bought on Amazon and other book buying websites, but we're trying for Barnes and Noble stores.

Posted by Frankensteinbeck at 7:11 PM No comments:

Also Out In Paperback!

And now the trio is complete!  Wild Children is ALSO out in paperback!  Turns out it was slow being released in that format because it's a honking god damn big book and that creates printing and expense issues.  Still, everyone always asks 'When will it be out in a paper version?'  Well, my personal favorite of my books is now out in paper version!

Please Don't Tell My Parents I'm A Supervillain has not yet started editing, and I suspect it will be awhile.  Curiosity Quills is growing so fast they're crushingly understaffed, and selfish author that I am I demanded my favorite (and badly overworked) editor.  Frankly, Verity is worth it.  She's amazing.

This horror novel continues to drag, but it IS getting written.  Every scene gets a little more fun, as the process of bending without breaking the characters to suit me is left behind and the monsters creep back onto the scene.  The noose tightens, and I love building tension.  I'm getting interesting inspirations a little more all the while, but I can't deny my heart is still with Metal, Candy, Flesh.  My moods get involved weirdly, as well.  I'm a terrible writing addict.  If I stop writing, I close up in a ball and stop enjoying the world.  If I get really stressed, that process can work backwards.  This makes momentum tough when I'm constantly reeling from the emotional highs and blows to my self-esteem that come with being a newly published author.

On a lighter note, that duck that used to hang out on my front lawn watching the house returned this year, but I only saw him once.  Will he be back regularly?  Why in heaven's name did a duck want to hang out alone on a suburban lawn in the first place?  It's these little mysteries that make life interesting.
Posted by Frankensteinbeck at 10:47 AM 1 comment: