The marketing team is still fighting over the lettering, but the art came in for Please Don't Tell My Parents I'm A Supervillain.  Check it out, because it is SWEET. 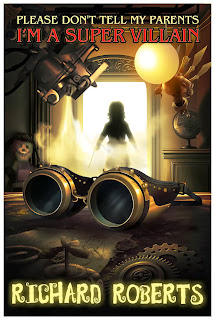 I want this book to come out, so bad.

Posted by Frankensteinbeck at 1:44 PM No comments:

I thought I should check out the Percy Jackson books.  All I'm going to be able to review is the first book.  If that sounds bad... yeah, the second book started out with a 'Insert MacGuffin and random encounter here'.  Not good.

But the first book isn't bad.  Not great, but I enjoyed it.  Greek mythological monsters make for great bad guys, the Cronus and Ares twists were very satisfying, and the 'son of Poseidon' thing was played well.  A distant father who helps him on the sly when he's in water.  Sure, that's how a son of Poseidon works.

The bad parts were mostly that the book is kind of generic.  Misunderstood boy finds out he's a hero and goes on a quest to find a MacGuffin.  The ADHD and dyslexia elements are handled clumsily, although I don't have anything against them existing.  I understand they were put in to help Riordan's son empathize.  There is almost no content outside of the central plot.  Characters are okay, but underexplored.  I had one nitpick that bugged me the whole way.  A major character is a daughter of Athena.  Athena is a lesbian virgin goddess.  She has exactly one child who's one of those freaky magical origin things, not the result of sex.  Daughters are not an option.

So, book is kinda so-so.  I enjoyed reading it, but I'm not enthusiastic about the experience.  #2 immediately dropped below that mediocre standard.

There is an interesting epilogue to this.  It made me think about why the Harry Potter books are better.  The concepts really aren't very different, and the paragraph-to-paragraph writing isn't all that different.  What made Harry Potter's uninspired idea cool was the depth with which the books explored the magical world.  Harry Potter lives a magical life, with magical people, with lots of time spent developing everyone's personality and having cool magical things happen outside the central plot.  Those gave the plot itself meaning, made it gripping.

That's a good lesson for a writer to learn.  I hope I can hold onto it, but I worry that my books are overstuffed just clinging tightly to the plot.
Posted by Frankensteinbeck at 1:42 PM No comments:

Not As Last As Expected

You know, normally I crave originality, but I think what I wrote on DA says it all:

I have discovered something very strange.  I have two books in progress, and writing one inspires me to write the other.  Lemon and Chocolate is a sensual book, literally.  Touch, taste, smell, and even sight and sound - it awakens me vividly to the senses.  This is something every book needs.  A Sidekick's Tale is a fantastic book, with strange and magical places and people.  It fills my head with wonder, and that is something Lemon and Chocolate needs.  Right now, it looks like I may be alternating chapters.  I finished this HUGE chapter (and split it up into parts) of Lemon and Chocolate more than a week ago.  I've just been procrastinating, and a bit depressed.

I am still not satisfied with the title 'Lemon and Chocolate'.  It's much closer to what I want, but the book is a romance with a little bit of hard adventure.  It's a story of love and hate and transformation.  'Lemon and Chocolate and Steel'?  Hmmm.  'Love and Hate and Candy' isn't bad.  Opinions or suggestions are and will remain very welcome.  A good title is extremely important.

So without further ado... have three more chapters!

Chapter 6, In which we find out what happened to Lem's home
Chapter 7, In which Lem and the chocolate rabbit have it out
Chapter 8, In which Lem finds out what losing means (Warning:  Torture)
Posted by Frankensteinbeck at 1:23 PM No comments:

Supervillain Progress And Art To Display!

There has been SUCH a comedy of errors with publishing Please Don't Tell My Parents I'm A Supervillain.  I'm happy to say I have progress to report, and really really interesting progress!  Check it out - these are the proposed sketches of two cover options! 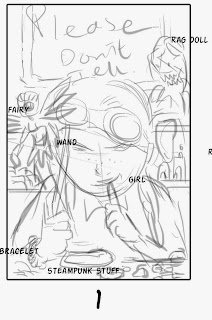 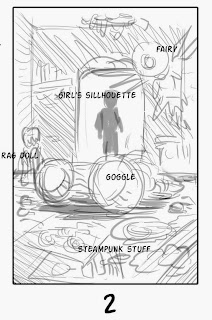 They're going with #2, which I completely agree with.  It feels funny to finally see this book in motion, but my main reaction?  'EEE, Vera's going to be on the cover!'

Posted by Frankensteinbeck at 9:10 AM No comments:

I Forgot About This Video

So I'm filling out advertizing stuff for Curiosity Quills, and I stumble across the video trailer they made for Sweet Dreams Are Made of Teeth.  My breath was taken away by what a good job they did with it.


It this leaves anyone wanting to buy the book, here's a link to it on Amazon!

As I write this, it is December 2nd, and for the 2nd and 3rd, the book is $0.99.  I wish my readers luck in buying in time to take advantage of that sale.
Posted by Frankensteinbeck at 12:33 PM No comments: