Or maybe semi-final.  I have two teasers lined up, but the Chinatown trip is SO fun, I'm not sure if I should spoil it.

But... somebody wanted another teaser, to tide him/her/it/they/uh through the last painful month until the release.  I give you... GERTY GOAT'S FAMILY FARM.  A sweet and heartwarming slice of life scene for Penny, with no excitement.

I needed a certain kind of restaurant for kids, and I asked my most prolific fan artist for ideas.  Welcome to an entire scene based off of this picture: 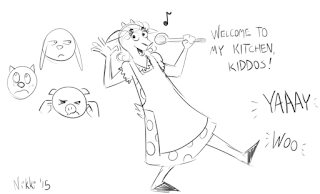 Posted by Frankensteinbeck at 1:56 PM 24 comments:

Woo!  Editing is OVER!  Complete!  Finished!  Oh, thank you, Tesla.

Book three of the Please Don't Tell My Parents I'm A Supervillain series will be released on February 8th, with preorders expected to be up by January 10th.

Now that I've gotten a range of feedback, I feel confident you'll love it.  I think this crowd in particular will be interested in Claudia and Marcia's arcs.  A whole lot of stuff you thought I've forgotten comes back in this book.
Posted by Frankensteinbeck at 10:21 AM 14 comments:

I generally like to let you folks speculate, but I'm spotting some confusion in the speculative threads.  Let me provide a quick history of the Puppeteer invasion!  All of this is deliberately contained in book two, but I went to no effort to make it clear, either.

Ca. 1900CE, the Puppeteers found our solar system through the teleport gate network.  The Earth contained at least one intelligent species, and the Puppeteers felt that it was their moral duty to uplift humanity from barbarism into their definition of civilization.  The best way to do this was gently, through undetected genetic manipulation, and they created two intelligent biotools to oversee this process:  Harvey and his unnamed partner.

Those two made contact with some scientists, mad and otherwise, on Earth.  They formed a partnership, the Red Panacea Clinic, and took advantage of the teleport gates to make a base in the asteroid belt that had direct access to Earth.  They began designing a non-catastrophic method of altering humanity to no longer value themselves as individuals, and instead focus on valuing all life as a whole.

It didn't go well.  Both Harvey and his partner were damaged, rendered insane by Puppeteer standards.  Harvey became obsessed with one particular experimental subject, treasuring the elements of her identity that would cease to exist if she were civilized.  His partner became obsessed with the mad science bioweapon development hobby he learned from their human contacts.  They arranged (metaphorically) to have our solar system lost in the paperwork of the Puppeteer civilization, so they would never have to finish their job.

Fast forward about a hundred years.  The teleport gates have been used for two major refugee escapes from Earth, one just before each World War.  Harvey managed to cover those up.  Humans go poking at the gate on Kalyke, and the Puppeteers notice.  They are reminded of the existence of humanity, and determine that the gentle, subtle attempt at civilizing humanity has failed.  Harvey is recalled to Kalyke to monitor the gate, which is about all his damaged self is good for, while more direct action is taken.

The Puppeteers invade the Jupiter colonies, with the intention of moving on to Earth.  As Harvey honestly reported, they do not have anything they consider weapons, and they do not deliberately kill any humans in the invasion.  Humans are instead infected with clumsy biotools that forcibly civilize each individual, rather than the gentle evolution the Puppeteers would have preferred.  The Jupiter colonists not only did not want to join Puppeteer civilization, they fought back violently.  They were completely outmatched.  Io Alpha was lost first, and then Europa Station.  The Jupiter colonists learned to fear 'meat puppets', Puppeteer-civilized humans who considered their own lives expendable if they could be used to spread civilization to more of humanity.

This all happened very quickly.  Weeks, a couple of months, tops.  Almost immediately after the Puppeteers invaded, the Conqueror Orbs followed.  They have a serious feud with the entire Puppeteer civilization, and one of their strongest programmed priorities is wiping out Puppeteer biotech wherever they find it.  Puppeteers have no 'weapons', but they are capable of violence, if it benefits life in general.  Their biotools and civilized humans attacked the Conqueror Orbs in suicidal rushes.  Io Alpha was destroyed.  Europa Station was hit by Conquerors and destroyed before the successful Puppeteer attack against it had even finished.

Remmy was one of the civilians evacuated both times those stations fell, by the way.  Her father did not make it out of Europa alive.

The Conquerors won the three way fight against humans and Puppeteers.  While they hate the Puppeteers, their priorities are a little weird by human standards.  After destroying all active Puppeteer forces, they did not bother to scour the nonsentient, automatic biotools left on the otherwise lifeless stations.  Those tools cleaned up the bodies and went into hibernation.  The Conquerors put a guard on the teleport gate so that the Puppeteers could not use it, but did not destroy the installation that had grown around it.

No, after stopping the Puppeteer invasion, the next Conqueror priority was to subdue the heavily armed and thriving intelligent life form on Earth.  They relocated the Orb of the Heavens to the Moon, and started to invade the Earth.  Thanks to the presence of large numbers of super powered individuals in the human population, that invasion failed.

Neither the Puppeteers, nor the Conquerors, noticed that there was life in the gas giant Jupiter, weird balloonlike tentacled beings who were powerful telepaths.  Harvey only noticed when the Jovians found a super powered telepathic human they could make contact with, because the Jovians immediately took her over and used her as a relay for their own powers.  As far as Harvey is concerned, telepathy is just a kind of biotool control signal.  Increasingly desperate to find some way to free Juliet, he sent a signal from the Red Panacea Clinic to the human the Jovians had taken over.  He was willing to risk just about anything at that point.

Instead, three tweens playing super powered hooky showed up, rescued Juliet, and gave the Jovians access to the kind of biotools that the Puppeteers had used to forcibly civilize humans.  You've seen the rest!

I hope this was interesting and helps with your speculations.

(Footnote:  The things that kept hatching and attacking Penny and her friends on Io Alpha were, indeed, cleaning tools.  They were set to absorb all biological material, and as such intended to eat any human, living or dead, that they encountered.  The Puppeteers would find that a tragic, repulsive accident, and would have tried to reprogram the cleaners not to, if they had been around.  They want to alter humans, not kill them.  Harvey was unable to reprogram the cleaners because Juno's presence nearby interfered with his signal.)
Posted by Frankensteinbeck at 2:31 AM 10 comments:

I Guess A Teaser Would Be Pointless

Book three, tentatively titled Please Don't Tell My Parents I Have A Nemesis, secretly subtitled The World Will Be Saved By Tech Support, but actually in my soul titled No One Wants To Hide Their Super Powers, is done.  It is written.  I have shipped it off to my beta readers.

No, you cannot be a beta reader, although I think it's super sweet some of you want to be.  It has to be people I know well enough to really understand their reactions and what those reactions mean.

If you have any questions or want any spoilers about it, let me know.  All I'm sure of from early reactions is that people really, really want to see a thirteen year old girl suplex a 6'10" metal supervillain.